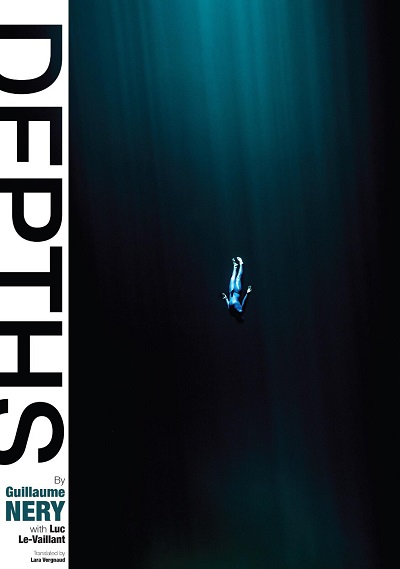 Exquisitely written, DEPTHS (English translation of Pronfondeurs, published in 2015) immerses you at the heart of one of the world’s greatest freediver’s training, routine, performances, technical difficulties to overcome as well as his lifestyle.
_

The life of a man is the time interval between his first and last breath.
Freediver, Guillaume Néry’s dives are between a last and a first breath.

Every dive of this constant weight freediving world champion reflects on a spiritual journey; a process of discovering oneself, becoming aware of being and let the flow of emotions to become sensations.

DEPTHS immerses you at the heart of Guillaume Néry’s training, routine, performances, technical difficulties to overcome, as well as his lifestyle. You will discover freediving more than a sport, however a philosophy of life and a way to reconnect to yourself.

Explore the ocean as a sixth sense; let yourself face the danger, confront the lack of being in control, accept the physiological and climatic constraints and adapt yourself to this new environment which is the depths of the ocean. Embark on an extraordinary journey that will lead you to the frontiers of your limits.

Guillaume Néry beats the world record four times in constant weight (descent and ascent using only fin propulsion). In 2011, he is recognised world champion after diving to – 117 meters on a single breath. At the 2015 AIDA World Championships pre-competition, he successfully reached -126 meters, setting a new French national record.

2 days later, Guillaume was pushed to pull out from the competition after having a black out while attempting a dive to -129m.

He actually reached -139m thinking being at -129m due to a technical mistakes from the judges and organisers.

Luc Le Vaillant is a former sailing champion. Journalist distinguished by the Albert-Londres prize, he is editor-in-chief of the portraits pages of Libération.